I’m a total book nerd, I’ll admit it. These are some of the books that have taught me many facts about the world. I take these lessons and recall them on a fairly frequent basis. Who said learning wasn’t fun??

Pretty much everything I’ve learned, I’ve learned from this book. I can’t tell you how many times I’ve brought up an interesting statistic that I learned from this book ever since I first read it. Yeah, it’s pretty much useful information but it’s cool information that you’re going to love and bring up quite frequently in your day to day conversations.

What If? by Randall Munroe

My dad introduced me to this really cool book by former NASA worker Randall Munroe. Munroe started this comic called xkcd which is a hilarious scientific look at the world. He also started answering questions that were sent to him which adapted into this book. Questions include: What would happen if you tried to hit a baseball pitched at 90% speed of light? And also, what if everyone in the world just had one soul mate – one random person somewhere in the world? Could they ever meet? These are weird questions but it’s interesting to here his scientific and illustrated responses.

Rules For Writers by Diana Hacker

This is a key tool for college students. Basically any college paper that you have to write is going to be in MLA or APA format and this book takes you through all of that. Sure, OWL Purdue is pretty handy with MLA as well, but Rules For Writers is something that you can easily flip through and also offers tons of grammar lessons that you may need a refresher on. It also has helpful little quizzes throughout which are all really awesome.

On Writing by Stephen King

On Writing is a helpful non-fiction novel from the successful horror writer Stephen King. Not only do we learn more about the writer himself, but we also get a look inside what works best for him and different methods that you may not be too familiar with. I found this book particularly fascinating and I really love it.

Now I Know by Dan Lewis 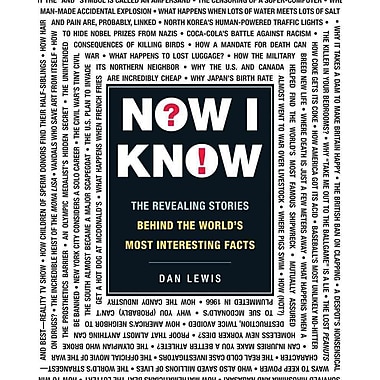 I actually subscribe to Now I Know’s daily newsletter. You can always count on the facts that Dan Lewis comes up with to be intriguing and to teach you a thing or two about the world in general. It’s all really fascinating and I commend Lewis for spending so much time collecting these facts and sharing them in a cool way with the rest of the world.

The Book Of General Ignorance by John Mitchinson

There aren’t many books that are witty and hilarious like this one. Author John Mitchinson informs readers that the book will set you up to win Jeopardy! or Who Wants To Be A Millionaire? And that is very much true. I appreciate all of these facts because they are so random yet you learn so much about the world and stuff that you were unknowingly super ignorant to for all these years.

The History Buff’s Guide to the Presidents

I love and recommend all of the books in the History Buff’s series. However, I had to shout out to this one in particular because I love all of the trivia and facts it taught me. Now I know a lot more about the U.S. Presidents and I think this guide stands out from the other one due to its easy to read format and how it manages to keep your attention the entire time.

One of the biggest things I’ve struggled with when it comes to studying in college is not having many sources to turn to. It can be hard to endure studying for midterms and all your exams when you’re not sure the best methods of studying. Here are some of my favorite sources for finding what studying strategies work best for you!

This website is really helpful because it has different guides and methods by subject. It also has general study tips, reading comprehension tips, and organizational tips. What I linked to was reading comprehension tips because I found those especially helpful. Sometimes reading my college textbooks can get a bit overwhelming and these tips really helped make that less daunting.

Some of these seem pretty basic knowledge you may already know but there are plenty of helpful guides as well. I found the time management guide especially helpful. I found the memorizing strategies helpful as well because I can always use those!

This one has so many different study guides that it can be overwhelming. There’s a lot of options here but that’s a good thing! Just find what works best for you. It’s pretty guaranteed that these site will have whatever subject you’re struggling with. They also have guides for those of you that are graduate students as well!

Yet another useful website filled with interesting tips. This one consists more of general tips than in depth looks by subject. However, the information is very specific and might be helpful for you guys for whatever you may be struggling with. It also may be useful for students that are not in college yet and are looking to get a head start on figuring things out.

SR Trends isn’t specifically a study blog. But it is a blog dedicated to college life and I found these basic study tips extremely helpful. It’s well researched and also has super pretty pictures to go along with it. What could be better than that?

Study Hack has tons and tons of cool resources and strategies. I personally enjoyed the speed reading, flash cards, active reading, and memory techniques that Kat gives us. It’s a really awesome and well organized blog that I strongly recommend!

This is a personal college blog which is something I always enjoy since these are students that are actually going through this currently. I love Dani’s post about making your own binder dividers and I found that to be seriously helpful. I also love all of her posts about organizing and there’s ton of them! She gets really specific about organizing your computer and other applications which can be useful for those of you who are balancing all of your college assignments, schedules, or whatever else it may be!

A tool for those of you that may be struggling with writing college essays. This site has tips about avoiding plagiarism, proofreading, finding a topic for a research paper, and much much more. I think every college student could learn a few things from checking this one out.

Hopefully you’ll learn some new information from these 8 different resources!