I talk about Friday Night Lights a lot. It’s one of my favorite shows of all time. I think what I love so much about it is how incredibly complex every single character on the show is. They all have more to them than what meets the eye, and that fact is very true when it comes to Tim Riggins. Riggins starts out the show as being this ragged looking guy who doesn’t get along with his teammates and doesn’t care about much at all besides booze and girls. We then learn more about how he lives with his older brother Billy and doesn’t have any parents around that truly care about him. He’s a solid football player but it’s also pretty obvious that his football days won’t go beyond the high school level.

Tim definitely isn’t the most charming of the Friday Night Lights boys. Matt Saracen, the quiet guy with a crush on the coaches daughter who also takes care of his Grandma full time, takes the most charming award by far. But there’s something about Riggins that appeals to audiences. He’s honest and he doesn’t care what people think about him. He does his own thing and people are into that. He becomes a much more likable and charming guy as the series progresses.

Some of the other characters may lose their charm, but Riggins simply becomes more relatable and charming. At one point, he is staying with the Taylor family as he gets back on his feet. He and Julie end up going to a party together and Julie winds up getting drunk. Tim takes her home and takes care of her but Eric walks in and sees them together and automatically assumes that Tim is taking advantage of her and kicks him out of his house. This is obviously a lowpoint but it also shows the more caring side of Tim. He doesn’t defend his actions although he wasn’t in the wrong in this situation. Instead, he handles the punishment that he doesn’t deserve which shows his maturity.

Even though I enjoy his moments of rebellion in terms of entertainment purposes, his more sensitive caring side is who he is. When he and his brother get caught for the chop shop Billy started in order to provide for his family, Tim takes full responsibility for it. Despite the fact Tim just got thrown into the whole thing, he knew that he owed his older brother. Billy had a family to provide for and he couldn’t go to jail so Tim, without any hesitance, went to jail without his brother knowing anything about it.

All of these examples prove that Riggins is a character who isn’t just attractive, he also has a good heart who does what he has to for the people that he loves. I can’t help but love his drunk and just flat out hilarious moments just as much as his others. This proves that he’s a multidimensional character which is really explored throughout the series. As Tim would say, “Texas forever.”

These are the types of couples on TV shows that you can’t help but love. Either for the fact that they’d make hilarious/amazing parents or the simple fact that they seem to just go together perfectly. Here’s some of my personal favorites that I’ve grown to love over the years.

Cliff and Claire from The Cosby Show

All opinions about Bill Cosby aside – the character he played in this show made the perfect husband. Claire was the ideal mom and she didn’t take Cliff’s crap. He didn’t boss her around and she didn’t sit around and make dinner for him. She was a hard working lawyer and he was a doctor. They were the first and have been really the only above class African American family on television. They are both iconic characters who showed love to each other in so many ways. They both respected each other which is exactly how relationships should be.

Luke and Lorelai from Gilmore Girls

Even though she fought it for many years – from the first episode, it was clear this pair would end up together. They bicker all the time but they banter back and forth like an old married couple and it’s hilarious and sweet. Luke is the only guy in Stars Hallow who can up with Lorelai. They also were close friends before they became involved which is important.

Lilly and Marshall from How I Met Your Mother 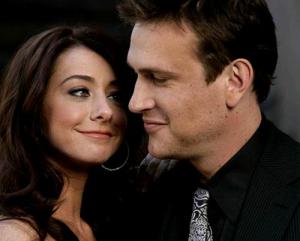 They are by far the best matched couple on the show and one of the best on TV as well. They are both so different but they somehow work together perfectly. They are both funny but also the most level headed of the group. It just seems like they’ve been together for such a long time but yet you never get tired of the love they have for each other.

Jim and Pam from The Office 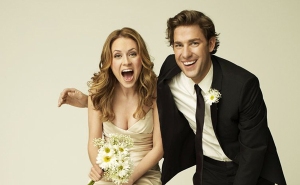 Yet another couple that was clearly meant for each other from the beginning. Jim had a crush on Pam who was a secretary at The Office since pretty much episode one. She had a douche fiancee and Jim basically had to work against that for a majority of the season. The show more or less revolves around their romance since it’s the most endearing and realistic of all the relationships that happen on the show.

April and Andy from Parks and Recreation

By far the most opposite couple on the list. April and Andy are a hilarious and weird couple. It was random when they got married on the show and people kind of thought it was a joke or something. This was one of the first episodes of the show that I really watched and I thought what April said about hating everyone except for him was so much like something I’d say. I instantly loved how this couple interacted with each other and had such remarkable chemistry. It’s a relationship that’s worked out really well on the show and it’s one of my favorites by far.