This is my first of two nostalgic based posts. My post tomorrow is a little bit different from this one because it’ll simply focus on one movie I enjoyed as a child but have no clue why I liked it looking back on it now. This post is going to focus on some of my favorite TV shows growing up. I’ll also talk about how it’s beneficial for us to look back on the shows that we watched and feel nostalgia. 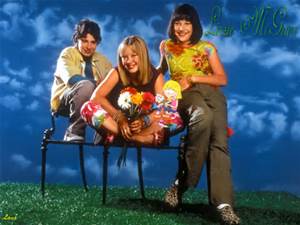 Lizzie McGuire was the coolest middle schooler ever. She was just like me: awkward and crazy about boys. She also had a crush on a boy that wasn’t too smart but was attractive and hardly knew who Lizzie was. Looking back on it now, I realize that Lizzie McGuire was a show that was pretty similar to every other show about growing up. You have your friends, the mean girl, the crush, the annoying parents, and the annoying little sibling. At the time, the show was completely in it’s own category and fit my life perfectly. I think it can be a good thing to rewatch this show because I still love it just as much as I did then. I still wish that I could be Lizzie so I could kiss Aaron Carter.

I haven’t watched That’s So Raven in a really long time. I still believe that Chelsea is my spirit animal. Everyone wants to be like Raven because she always has the best intentions but they just don’t go according to plan. She’s a fun and relatable character because she loves shopping, boys, and music. She also fights a lot with her younger brother. As someone with a brother, I always understood this about Raven. Her parents were both hilarious characters that were constantly punishing Cory. Eddie was Raven’s fun second best friend who hungout with Cory sometimes. This show is still relevant regardless of how old you get because of the sentiment and lessons it teaches.

This was our favorite Disney show in the Geiger household. Young Shia LaBeouf as Louis Stevens was the actor at his absolute finest. His incredibly high shrilled girly screams are classic. This is a fun one to go back and watch again. The episodes are pretty silly but somehow the characters still make it hilarious. The banter between Ren and Louis is an accurate portrayal of a brother and sister relationship. The two’s older brother Donny is clueless but loveable. The best character is easily Beans. Every second that he’s on screen is guaranteed to make me laugh.

My taste in what I watch has changed every year. Now I probably watch a little too much HBO so it can be nice to revisit these shows that I loved when I was younger. Taking a trip down memory lane can be fun to do just because of the family element that these shows provide. It can also be nice to get some of those cheesy lesson that you can count on from the episodes. It’s good clean entertainment and sometimes that can be a nice comfort.