1. She always has unique and edgy clothes that make her stand out.

2. Her appearance on this Brazilian late night TV show. She handled that awkward question a lot better than I would have.
http://youtu.be/30RX9Qz99x8

3. She takes accountability for her actions.
The song “I Blame Myself” sums up Sky’s time in the spotlight completely. She knows that she’s been signed to a record company since she was a young girl and she’s no Britney Spears. Her debut record was put on hold repeatedly and then her arrest for cocaine pushed it back further. What makes Sky different from her peers is that she doesn’t play victim. She’s old enough to know that she was wrong and that’s admirable.

4. The song “Everything Is Embarrassing”
“Everything and nothing always haunts me” starts the open line of Sky’s most popular song. She didn’t write the song, Blood Orange did. However, the way she delivers it has such passion. It’s a beautiful song and I love the video. http://youtu.be/rEamE0MYPkg

5. Her interviews are so real
She tells it like it is. She doesn’t try to hide who she is which is something to admire. I love the last thing she says here.
http://m.pitchfork.com/features/interviews/9248-sky-ferreira/

6. She’s a fangirl.
In this Rookie interview, Sky obviously talks about her music and the stories behind her songs. She also fangirls over some of the movies and TV shows she loves. I love that she watches Toddlers & Tiaras, Weird Science, The Secret Life Of Alex Mack, & how she casually adds in the awesome tumblr Feminist Ryan Gosling.
http://www.rookiemag.com/2012/02/sky-ferreira/

7. She supports peace.
She posted a picture on Instagram of a Support Ferguson, Support Peace shirt. She said that she wanted to perform at a show with Cat Power to show support but her contract obligated her to another show. Regardless, it’s awesome that Sky stands up for causes that she believes in.

8. She isn’t a diva
She truly cares about her fans. Sure, she may not reach out to them in a Taylor Swift manner but she still is sincerely thankful that they support her.

10. Her music isn’t your average pop music.
I love that her music isn’t traditional. It has this vintage pop feel to it. It’s something different which is why Sky isn’t exactly mainstream. But she doesn’t have to be, her fans love her and her music regardless. 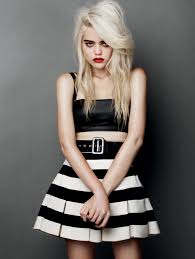 If it’s not already obvious, I’m in love with Disney Channel Original Movies. The best ones were from the late 90’s but I admit that I love the later ones too. All of these movies may be sprinkled with a different theme, but each still has a moral lesson that teaches us about ourselves and others. Here are the challenges the characters had to face & the lessons they and the audience learned along the way.

Luck Of The Irish
Challenge: Teen boy becomes a leprechaun, encounters evil middle aged men who challenge him, and is forced to suck at basketball.
Lesson: He learns about his Irish heritage and learns it’s more than just luck.

Brink!
Challenge: Brink’s family is short on cash so he breaks his soul skating rule and joins the dark side with mean Val.
Lesson: At the end of the day, Brink stays true to his friends. His dad doesn’t understand him but they patch things up of course.

Rip Girls
Challenge: A young girl moves to Hawaii to make sense of the past of her deceased mother. Sydney and her dad own the island and must decide whether to sell it or not. Her dad wants to sell it because the island brings bad memories for him.
Lesson: Be a loyal friend. Stay true to where you are from.

Thirteenth Year
Challenge: Cody turns into a merman on his 13th birthday. It doesn’t get more complicated than that!
Lesson: Learn about who you are and where you came from. And never desert your friends.

Pixel Perfect
Challenge: Roscoe is a tech geek. His best friend Samantha is the lead singer and guitarist for her band the Zetta Bytes. They aren’t getting gigs because Sam doesn’t dance around like a popstar. Roscoe creates a hologram of a beautiful perfect pop star.
Lesson: Although Loretta seemingly has it all, she isn’t real. She envies Sam because even though she’s imperfect, her thoughts and feelings are real. Basically, you have to accept who you are, flaws and all.

Johnny Tsunami
Challenge: Johnny is a Hawaiian surfer who loves his life. His dad gets a job transfer and Johnny is forced to move to Vermont. Vermont has two schools, a private school where everyone is a skier and a public school with snowboarders. Johnny faces drama between the girl he likes and the boy that likes her.
Lesson: Always be open to change. Don’t be afraid to try something new. Fitting in is overrated, nothing is wrong with standing out.

High School Musical
Challenge: Troy sings Karaoke over Winter Break with a girl named Gabriella. She then shows up at his school and Troy desperately wants to sing instead of just playing basketball. His dad is the coach and doesn’t accept his singing. The rest of the school believes you must stick to the status quo.
Lesson: You don’t just have to be the basketball guy. Once Troy’s dad sees him singing with Gabriella, he knows it’s his sons passion. The rest of the school also accepts Troy and Gabriella’s hobby and also is open about the things they love that aren’t traditional for the clique they are apart of.

Camp Rock
Challenge: Mitchie is an aspiring singer who wants to attend Camp Rock. She can’t afford it but her mother becomes a cook and Mitchie is allowed to attend in exchange for her help in the kitchen. She convinces the mean girl that her mom is the President of Hot Tunes TV in China in order to fit in with everyone else. Shane Gray, the spoiled singer of trio Connect 3 helps the campers with dance classes. Shane and Mitchie form a bond but he is oblivious to who she really is.
Lesson: Be comfortable with who you are. If you’re good at something, how much money you have doesn’t matter. Just show your talents and disregard everything else. Don’t worry about what people think about you.

Starstruck
Challenge: Christopher Wilde is a popular teen pop star. Jessica is a regular girl from Michigan visiting her Grandma in LA. Her sister Sarah is obsessed with Wilde, who Jessica seriously loathes. Jessica is forced to accompany her sister to a show where Christopher accidentally hits Jessica with a door and she winds up spending the rest of the evening with him. The two grow close but the pop star is being considered for a movie and they believe Jessica is bad for his imagine. Christopher denies he knows her and makes Jessica look like a stalker.
Lesson: After an intervention from his best friend, Christopher sees that he’s let other people dictate his life. He realizes he wants to be with Jessica and nothing else matters. How can real people learn from this? It’s important to make your own choices and think of yourself no matter if your famous or not.

The worst day was something that happened relatively early on in my life. It was a beautiful 9 years filled with little stress and many carefree childhood activities. I met my best friend at our babysitter’s house when I was 3 and she was 2. Sarah was adopted from China and was unfamiliar with life in America when she first arrived. I was on outgoing toddler not afraid to introduce myself to the only other child at my babysitter’s house that year. “Hi I’m Rachel, we should be friends.” was all it took and then after sharing toys, Sarah and I became best friends.

Unfortunately, I went to preschool a year earlier than Sarah. For elementary school, we both went to different schools. Our moms knew how close our bond was and we took gymnastics, dance, and theatre lessons together. Throughout the years, Sarah was still my best friend. We made our school friends but we were sisters. Our bond consisted of tree climbing, singing, and letting our imaginations run wild. It was such an inseparable due to the innocence, freedom, and how drama free it was.

Sarah was a free spirit who was a healthy reminder of what childhood meant. Childhood meant not being burdened by the problems that plagued our parents. It meant watching Dragon Tales together and singing and dancing along to every episode. It meant being creative as we played with our favorite dolls. One seemingly normal morning, this childhood was abruptly ended. It was 9:30 on a school day and both of my working parents were home. I was 9 years old and was confused by the odd turn of events but my parents were holding themselves together. Easing me gradually into the situation, my parents sat me down on the couch and told me that my best friend had died.

My first reaction to the news was that they were lying. How else would that explain a healthy 8 year old girl being stripped away of her life? Sarah had strep throat, a seemingly normal sickness for any child to get but this particular case went to Sarah’s blood stream and killed her.

Sarah was the reason I got into theatre. She was more outgoing and expressive than I was. I was hesitant to get involved into a theatre camp but I mostly just wanted to spend time with Sarah. I ended up getting a lead in our community theatre production. Sarah hadn’t auditioned for any community plays yet but she was more excited about my role than I was. It was tech week the day she died. The day of her funeral was a press event for the play.

I didn’t know what to do when I saw my best friend looking peaceful in a coffin at her visitation. Her mother pulled me aside and told me not to remember Sarah as she was right now. Her mom wanted me to remember her as my best friend. The one who played, swam, and loved the everyday mundane situations in life.

It will be ten years this November since Sarah has been gone. The grief I feel for the life she didn’t get the opportunity to live is still there. The only difference between these 9 and a half years is that I’ve learned to live my life. I still miss her and what it meant to have a completely innocent and playful friendship. However, I know that when I reflect on my childhood Sarah will be the fondest memory of all. Any basic activity I enjoyed at the time was amplified by having this lively girl by my side.

This was the worst day of my life. Yes, there have been many and will be many more that are just as unbearable. This day in particular was the training ground and prepared me for how random and unexpected life can be. I learned that we can’t take anything for granted. I have no clue why Sarah had to die yet I lived. I also know that thinking too deeply about these things is useless. I’ve been given this life and I know that Sarah would want me to live it. It’s the least I can do for the brown eyed girl with the shiny and sleek black hair that changed my life.
http://dailypost.wordpress.com/dp_writing_challenge/memoir-madness/